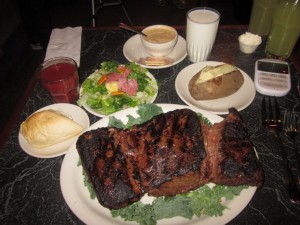 For 47 years, no man, woman, or child had been able to conquer the Wedgwood Broiler’s 1-hour, 72 ounce Steak Dinner Challenge.  That was until last Friday night, when the Kansas City man/body builder/professional digester/former Missouri State University lineman, Randy Santel, took on the challenge.  According to the Seattle Weekly, who was on hand for the historic evening, “Santel on Friday night demolished the steak, baked potato, salad, roll, cup of soup, glass of milk, glass of tomato juice and a dish of vanilla ice cream in 41 minutes and 46 seconds.”  This was Santel’s 98th successful eating challenge that he’s completed.  Since Santel’s accomplishment, his story has received lots of attention from various news outlets, including the Seattle Weekly, Seattle PI, Kansas City’s The Pitch, MSNBC and the Daily Mail.

The man has an insatiable appetite.  While in town, Santel also ate a 3 liter bowl of ramen in 14 minutes and 26 seconds at Kobe Sushi Bar (to which he won $100 and promptly donated to Boys and Girls Club of Bellevue), a 2 foot long hot dog from Wing Central Bar and Grill on the Ave in Seattle,  a 6 lb burger from the Loose Wheel in Tacoma, 12-Stack 3lb Burger w/ 1lb french fries at Burger Madness in Seattle, a 6 lb burrito at Masa in Bellevue, and a 1 lb doughnut from Legendary Doughnuts in Auburn.

This accomplishment is not for everyone.  You can read one man’s failed attempt at completing this food challenge HERE.  The history of the Wedgwood Broiler can be read HERE.

Mr. Santel’s appetite both disgusts and amazes me.  Yet we congratulate Mr. Santel for making history in our neighborhood.