There was a packed house at the Meadowbrook Community Center on Tuesday evening, May 15, to hear representatives from Seattle Public Utilities (SPU) talk about dredging work which will close Meadowbrook Pond for about two months, beginning in early August.  SPU’s Deborah Ann Heiden presented the schematics of the improvements and the landscape plan for replacing vegetation and trees.

Meadowbrook Pond is on 35th Ave NE at about NE 107th Street, directly across from the Meadowbrook Community Center.  The site was originally occupied by the Lake City Sewage Treatment Plant and was re-created into a park-like environment in 1998.  The pond provides habitat for wildlife and a peaceful retreat for people, but the pond’s main functions are flood management and a place for sediments in the water to deposit.  Meadowbrook Pond collects a large amount of sediment coming through the Thornton Creek watershed, draining a twelve-square-mile region of north Seattle. 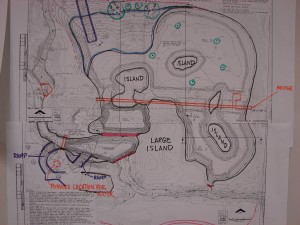 It is now time to dredge Meadowbrook Pond so that later in the year when heavy rains come, the pond will be able to absorb more water.  Additionally at this time other improvements will be made so that Seattle Public Utilities’ workers can have better access to do routine maintenance such as clearing the trash rack and bringing in a vacuum truck to extract sediment from the pond.  The controversial aspects of the improvement plans are the widening of an access road which will mean the removal of some trees, and how the dredging will affect the overall health of the pond.

Another point of discussion at the meeting was crime prevention and security issues at Meadowbrook Pond.  Ken Armstrong of SPU explained the trade-offs of having better sightlines by removing some trees, and also lowering berms to eliminate hiding places.  SPU is working with the City of Seattle’s Law Department to write municipal codes to prohibit specific activities, which will give the police a better tool of enforcement at Meadowbrook Pond at night.

Additionally in 2013 more work will be undertaken by SPU along 35th Ave NE north of Meadowbrook Pond.  Culverts will be replaced to allow for passage of higher volumes of water.  All of these improvements are intended to help reduce flooding in the area, especially in “the Confluence” which is the flat part of 35th Ave NE from 107th to 109th.  More information about the Meadowbrook Pond Project can be found at:  www.seattle.gov/util/meadowbrook/