What is the work of the Wedgwood Community Council and what do the WCC volunteers do?

The WCC formed in 1986 after a lapse of more than fifteen years since there had been an active community club.   The WCC is a volunteer group which was set up with the help of Seattle’s Department of Neighborhoods.   Since 1986, the WCC has been actively involved in issues from crime to traffic to improvement projects such as The Gathering Place, completed in 2011, at the Hunter Tree Farm property. 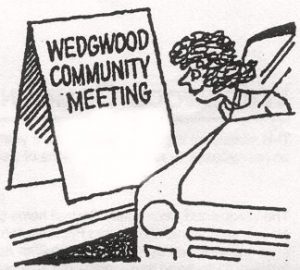 One of the main purposes of WCC is to provide a public forum.   The WCC can communicate and notify through means such as this website (wedgwoodcc.org), via email, Facebook, Twitter, by calling a meeting or by outreach at events such as doing an info table.   The WCC serves as a facilitator for people in Wedgwood to find out how to get involved in issues of concern, where to go for help and how to be heard.

The WCC seeks to develop relationships with City of Seattle departments so that WCC can learn how to obtain city services and can inform city departments for an understanding of Wedgwood’s needs.   Since developing a Vision Plan in 2010, WCC volunteers, including the officers who are called trustees, have had many meetings with city officials in departments such as Parks, Transportation (SDOT), Emergency Management, Planning & Development (DPD), and the Office of Economic Development (OED).    In the past two years several city council members and the mayor himself have been on walking tours of Wedgwood’s commercial district and have discussed the future of development in the neighborhood. 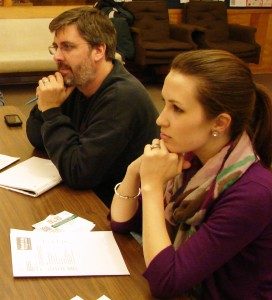 The WCC officers are called trustees and have monthly planning meetings. Sometimes guests from local businesses or other organizations come to the meetings to coordinate on activities and concerns.

You can learn more about the Wedgwood Community Council and meet the WCC volunteers at the information table July 14 and 15, 2012, at the Wedgwood Art Festival.   Look for the WCC info table on the grassy lot nearest to NE 80th Street.

The WCC booth will also have Valarie’s displays about many different aspects of the history of the Wedgwood neighborhood.  Come say “hello,” and bring your questions about current WCC activities or about past historical events.