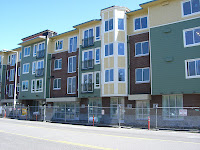 Density. It’s a four letter word to some and can strike fear in predominantly single-family neighbors like ours along 35th Ave NE despite its many different forms and means of measurement. While at the Seattle City Light’s formal hearing last week on their plans to dispose of (sell) their 5 surplussed substations throughout NE Seattle, a frequent comment was something like this, “Whatever you do, I don’t want more density.”

Yet there are many benefits that density can bring to residential communities like ours, most of which were articulated in the Wedgwood neighborhood’s Vision Plan.  Catherine Benotto, with the architecture and planning firm Weber Thompson, shared some of the benefits from increased density during our last Coffee Talk, which include increased neighborhood services, increased availability to transit (less driving!), increased walkability, more diverse retail, and more.

The fact is increased density is going to occur along 35th Ave NE based on the current zoning.  The question is how to encourage the types of development that support a more walkable neighborhood with the strong retail corridor that includes more restaurants, hardware store, and book shop like the community has said it wants?

Our upcoming Coffee Talk on Thursday, July 26th at Wedgwood Presbyterian Church from 7-8:30PM, will feature just this.  Ellen Miller-Wolfe, the Kirkland Director of Economic Development, will speak on the “Financial Realities of Development. Incentivizing Successful Development.”  As always, the Coffee Talk is sponsored by our phenomenal neighbor, Top Pot Doughnuts.

Here is a terrible quality video of Coffee Talk 5: The Benefits of Density, featuring Catherine Benotto, for your viewing pleasure.

Coffee Talk 5: ”Density and its Benefits” from Wedgwood Community Council on Vimeo.