On Thursday evening, January 24, an attempted bank robbery ended in South Lake Union when the bank’s security guard overpowered the suspect.  Around 5:30 PM on Thursday a man dressed in a ski mask used what turned out to be a fake gun to threaten a bank clerk and demand cash.  As the bank clerk was handing money over to the suspect, a bank security guard walked up behind the robber and knocked his (fake) gun out of his hand.  The suspect resisted and wrestled with the guard; both men fell to the floor where the guard was able to overpower the suspect and hold him down until police arrived. 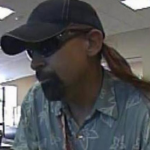 Police are investigating whether this 44-year-old suspect is responsible for a number of other bank robberies, a total of at least nine which began on September 7, 2012 with KeyBank at 7307 35th Ave NE.  It is believed to be this same suspect who robbed Homestreet Bank at 8200 35th Ave NE on October 2, and US Bank at 8702 35th Ave NE on November 28.  SPD’s Safe Streets Task Force nicknamed the suspect “Jimmy Buffett” because at the KeyBank Bank robbery the man wore a Hawaiian shirt, sunglasses and a cap resembling the popular singer of “Margaritaville” and “It’s Five O’Clock Somewhere.”