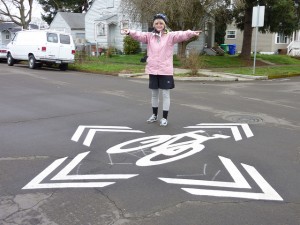 CM Sally Bagshaw at a greenway in Portland.

The Northeast District Council (NEDC) is a coalition of neighborhood organizations, including the WCC, that meets monthly to discuss matters that effect NEDC member neighborhoods or the City as a whole.  At tomorrow’s meeting, the NEDC meeting will feature a 1 hour panel discussion (7:20ish-8:20ish) on neighborhood greenways, like the new greenway on 39th Ave NE.  The panel speakers will include:

The NE Seattle Greenways group has identified a network of greenways and pedestrian/bike improvements to improve the connectivity and safety of Seattle’s bike infrastructure.  This information was used, in part, as part of the Seattle Bike Master Plan Update.  A map of these greenways is included below.

The NEDC generally meets the first Thursday of every month.  Every meeting is open to the public.  If you would like to make a comment though or be on the meeting’s agenda, notification is required ahead of time.