Home »Community Events»Digging into the Past and the Present 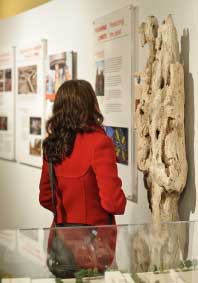 There are two free-admission museums in the Pioneer Square area which are great for kids and for anyone interested in the 1897 Klondike Gold Rush or in the current Alaskan Way Viaduct Replacement Project.

The current Alaskan Way Viaduct Replacement Project is being conducted by the Washington State Dept. of Transportation (WSDOT.)  As part of public outreach and information-sharing, they have set up a museum called Milepost 31. Milepost 31 is an information center to explain the people and processes which have formed that spot by the Viaduct, next to the edge of Pioneer Square.  Beginning with glaciers, earthquakes and volcanoes which transformed Seattle’s landscape, Milepost 31 tells the story of how the land has changed.  Earth-moving efforts of the past such as regrading have also changed Seattle and now the massive SR 99 tunnel project will move the highway underground. 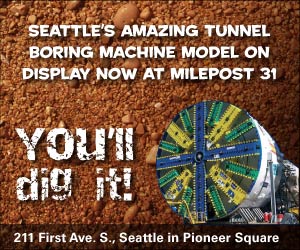 Milepost 31 is located at 211 First Ave South, between South Washington and South Main Streets.  Hours are Tuesday through Saturday, 11 AM to 5 PM, and open until 8 PM on the first Thursday of each month.  On Thursday, March 7, from 6 to 6:30 PM a speaker will tell how crews will transport the tunnel boring machine in more than 40 pieces from a ship at the Port of Seattle to the pit by the stadiums where it will begin tunneling this summer. 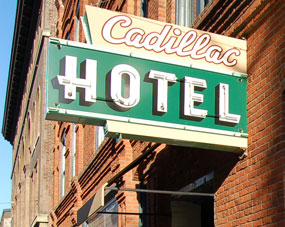 Another nearby free-admission museum is technically not a museum but is a national park site:  the Klondike Gold Rush National Historical Park, located on the northwest corner of Jackson Street and Second Avenue South.  The Gold Rush “museum” is open 9 to 5 daily and can be identified by the Cadillac Hotel sign on the corner.  The museum is in this historic building which was badly damaged in the February 2001 earthquake, and has been restored.   Interactive displays at the museum tell the dramatic story of the 1897 stampede to the Yukon gold fields which changed Seattle forever, making Seattle the Gateway to Alaska.