Home »Wedgwood History»Thanks for the Hamburgers 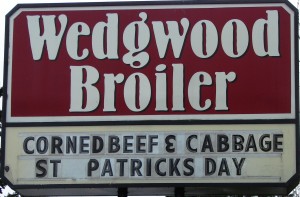 March 16, 1903 was the birthdate of Albert Balch, the developer who built Wedgwood.  Balch was primarily a residential builder but he wanted the neighborhood to have services such as businesses, restaurants and medical offices, so he made provision for those.  Balch’s office was in the present Seattle Audubon Nature Shop at 8050 35th Ave NE, and he built offices for doctors and dentists next door to that.  Balch leased property for a grocery store, Tradewell, which today is occupied by QFC.  For lack of other restaurants in the neighborhood, Balch helped start one which he named the Sir Wedgwood.  Today’s Wedgwood Broiler was founded on Balch’s hunger for steaks and hamburgers.  This week on Valarie’s history blog, read how the old Community Club repelled drive-in hamburger joints but Balch found a way around it.  (Disclaimer: Valarie is a vegetarian.)