Home »Architecture»Schools at Landmarks Board: Montlake 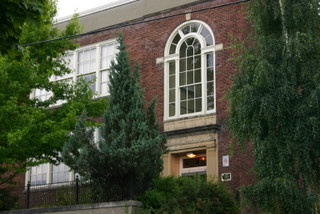 The City of Seattle Landmarks Preservation Board are appointees who serve under the Department of Neighborhood’s Historic Preservation program.  At the meeting on April 17 the Montlake Elementary School building was on the agenda for the board’s consideration.  The nine board members who were present agreed that the Montlake School building is worthy of nomination based upon one or more of six criteria.  The board now has about about six weeks to consider, and tour the building if they so choose.  A final vote, called designation, will take place on June 5th. 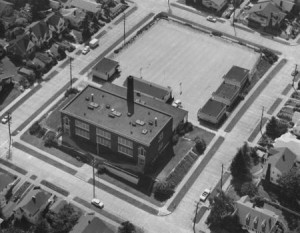 The Montlake School landmark nomination has been brought forward with funding from the Montlake Community Council.  They hired historic preservation specialists from BOLA Architecture + Planning to research the school building’s original design, architect and its eligibility for historic status.  Of the six potential criteria for preservation, the Montlake School has been nominated on the basis of criteria (c) that the building is associated in a significant way with the cultural heritage of the community; (d) it embodies the distinctive visible characteristics of an architectural style; and (f) because of its prominence of spatial location, it is an easily identifiable visual feature of its neighborhood and contributes to the distinctive identity of Montlake.

What are the advantages of designating a school building as a City of Seattle landmark?  The benefits include the management by the Landmarks Board of all future development or changes to the building, either as owned by Seattle Public Schools or, if ever closed and sold, the new owner.  The goal of the Montlake Community Council is to preserve the school building and its site as a main feature of the Montlake neighborhood.