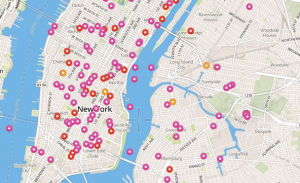 A recent article in The Atlantic Cities tells of efforts to document “close calls” which are meaningful signs of an unsafe street, but are not documented because the crash didn’t actually happen.  In the wake of events on NE 75th Street (which we all knew is not a safe street) we asked ourselves, why do we have to wait until people get killed before we can fix the traffic issues?  Near-miss data might have real value in preventing real tragedies.

The only way that traffic engineers have to know where to make improvements is in actual crash data.  Now a New York City advocacy group, Transportation Alternatives, is testing a web platform called Crash Stories NYC which invites New Yorkers to map their near-misses.  The traffic incidents that almost happened, can be mapped and this data used to show that infrastructure improvements or stricter traffic enforcement is needed.  Could we, advocates of a safer NE 75th Street in Seattle, use data on near-crashes?  Bring your ideas to the meetings with Seattle’s Department of Transportation coming up on April 23, April 25, and May 1st.