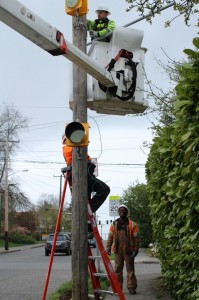 Flashing beacon lights have been installed in the Eckstein School Zone.

Two community-input meetings have been held with the City of Seattle’s traffic engineering department (SDOT) to gather ideas for improvements on NE 75th Street.   Both meetings had good attendance and a wealth of great observations on how car, pedestrian and bicycle traffic can be improved for greater safety for everyone.   Steady progress is being made, with some improvements already done, such as this week’s installation of flashing beacons in the Eckstein School Zone.

At the meetings on April 23 and 25 SDOT engineers Dongho Chang and Jim Curtin reviewed the improvements to NE 75th which have been made so far.   This week flashing lights have been mounted to help cars be alert to pedestrian crossings, and new crosswalk markings have been put in at 31st Ave NE.   In-process are better drop-off procedures for parents bringing students to Eckstein Middle School by car.

The intent of the NE 75th Street Road Corridor Improvement Project is to improve safety and traffic flow along the NE 75th Street corridor from the intersection of 35th Ave NE, all the way west to I-5.   For that reason the third community-input traffic meeting will be held in Maple Leaf/Roosevelt at Calvary Christian Assembly, 6801 Roosevelt Way NE. The meetings are open to everyone, so if you haven’t yet had opportunity to attend, please consider attending on Wednesday, May 1st, 7 to 9 PM.

Traffic engineer Dongho Chang explained that two of the main ways to improve safety on NE 75th Street are to deal with speed and with confusion.   People drive in excess of the speed limit; they swerve around slower cars, because it is not clear where the traffic lanes are.   One of the main ideas being considered by SDOT is to re-stripe NE 75th Street as ONE lane in each direction, with a turn lane in the middle. Narrowing the street to just one lane will slow the traffic.

Where the roadway is wide enough to  include a dedicated lane for right-turning cars, this could help to smooth the flow of traffic as well.   Two of the chief right-turn trouble spots are at 28th Ave NE and at 35th Ave NE.   The Wedgwood Swim Pool is north of NE 75th Street and the only way to get to it is on 28th Ave NE.   There have been “close calls” at 28th where drivers were so busy watching other cars and feeling pressured by high-speed traffic coming up behind them on NE 75th Street, that they did not notice pedestrians crossing.   The same has happened at the intersection of 35th Ave NE; drivers have too many things to watch and will sometimes turn without seeing a pedestrian, even in the marked crosswalk. 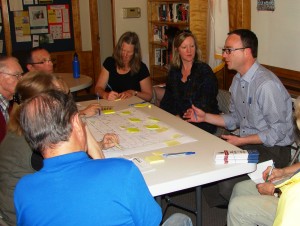 It has been shown that slowing traffic and helping drivers be more aware of pedestrians are the two main ways to prevent accidents.   When drivers see a lot of pedestrians and are alerted by lighted crosswalks, drivers will slow down.   In connection to being alert to pedestrians, SDOT is working with Eckstein Middle School on safety issues for students, including safe walking and biking routes and improved car drop-off patterns. 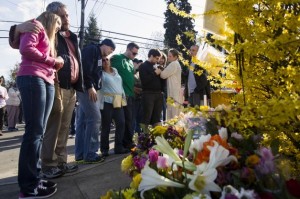 The March 25, 2013 traffic deaths and injuries on NE 75th Street were caused by drunk driving. Combating DUI was mentioned at the recent community meetings but the measures that need to be taken, must be addressed by our state legislature.   Citizens are urged to write to state legislators and attend a Wedgwood Community Council meeting on May 15 when you may speak with our 46th District senator and representatives in person.

Input is still being gathered.  Please consider attending the next community meeting on May 1st, look at the webpage that has been created for the NE 75th Street Road Corridor Improvement Project, and send in your ideas.   You can send input to Jim.Curtin@seattle.gov or to Dongho.Chang@seattle.gov or by mail to SDOT, PO Box 34996, Seattle, WA 98124.