National Bike to School Month Rally
Wednesday, 8:00AM at Top Pot Doughnuts
(Ride Departs for Bryant Elementary at 8:40AM) 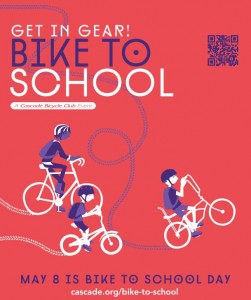 The weather outside is phenomenal for sure, but there’s even more of an incentive for kids to ride their bike to school now.  May is National Bike to School month and what better way to start it off than with a Bike to School Rally,  featuring the Seattle School District Superintendent, Dr. José Banda; School Board member Kay Smith-Blum; Seattle City Councilmember Sally Bagshaw;and Cascade Bike Club’s Education Director, Julie Salathé on WEDNESDAY, 8AM at Top Pot Doughnuts.  According to the Cascade Bike Club, the ride will depart Top Pot Doughnuts at 8:40AM and make its way to Bryant Elementary for a brief press conference.

According to Bryant Bikes organizers, Superintendent Banda reminded all Seattle School District principals earlier this month in a weekly communication that May was National Bike to School month and stressed the benefits of biking (and physical activity in general) for kids, stating the following:

SPS asks all staff to engage students around the benefits of bicycling in the interest of creating the healthiest and safest school community environments and promoting healthier lifestyles. In addition to fighting childhood obesity and promoting environmental consciousness, studies have shown that students who take part in more vigorous physical activities perform approximately 10 percent better in core classes such as math, science, English and social studies. Please encourage your communities to organize group rides to schools and engage students in activities around bicycling on May 8 and beyond.

The weather is fantastic!  So dust off your helmet (and your kids), pump up those tires, and get your bike riding on.  You’re an example to your children!

On a much more somber note, a memorial bike ride has been organized for May 7th at 5:30PM to remember Lance David, the man struck and killed by a truck on East Marginal Way on May 1st while riding his bike.  We in NE Seattle are well aware of the need for safer streets, not just on NE 75th Street, but everywhere throughout the City.  For those interested in participating in the ride, you can read more here.