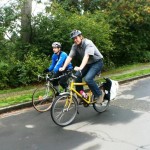 On June 19-22, 2013, the University of Washington hosted a Bicycle Urbanism Symposium to explore the ways that cities can encourage and accommodate bicycle travel.   The keynote speaker, Prof. John Pucher from Rutgers University in New Jersey, went on a bicycle ride along Second Avenue in downtown Seattle.   He described the experience as “death-defying – I almost got killed five or six times.”   Prof. Pucher was more favorably impressed with Seattle’s efforts to create Neighborhood Greenways on side streets for safe cycling.   A Greenway route like the one on 39th Ave NE in Wedgwood is marked and has intersection treatments to help cyclists and pedestrians cross safely with more visibility to drivers of cars. 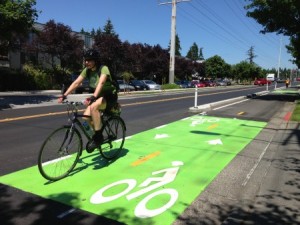 The safest alternative for bike riding on Seattle streets is a completely separated space called a Cycle Track, like the one which has been completed along Linden Avenue North by the Bitter Lake Community Center. The Cycle Track is a lane marked by a low wall as well as paint and striping to alert drivers. Parking for cars is provided alongside of the Cycle Track so that there is still as much parking as there was before, but the roadway has been narrowed to traffic and lower speed-limit signs posted. Narrowing the roadway is intended to help slow car traffic. The Linden Avenue Cycle Track connects with the Interurban Trail at N. 145th Street, where there is a traffic light and a marked crosswalk.

How would a proposed Cycle Track affect 35th Ave NE? 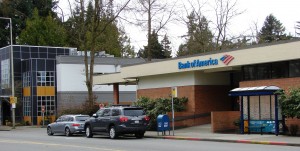 How would a Cycle Track impact businesses and traffic on 35th Ave NE?

In meetings following the NE 75th Street traffic tragedy of March 25, 2013, it was said that the best way to prevent collisions between cars and cyclists or pedestrians is to completely separate traffic into protected lanes.   While a Greenway has marked lanes, a Cycle Track is even more separated by a median or low wall.  The draft of the City’s Bicycle Master Plan has proposed a Cycle Track for Wedgwood’s commercial corridor of 35th Ave NE. The idea of restricting lanes on 35th Avenue NE to take away some space now used by car traffic, is a controversial one. This draft/idea has caused immediate reaction that the plan might restrict parking and access to businesses. Other people, based on info that has recently been shared about accident prevention, believe that a cycle track on 35th Ave NE would help to slow traffic and create greater safety.

The comment period for the City’s Bicycle Master Plan is open until Friday, July 26th. Please do take a look and submit comments to bmpupdate@seattle.gov 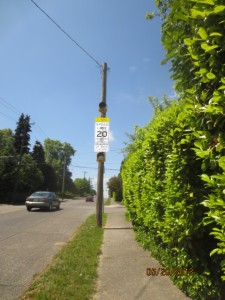 Meanwhile, we expect to hear from Seattle’s Department of Transportation in July, about plans for improvements on NE 75th Street. “Channelization improvements” are anticipated, meaning changes to signs and pavement markings to more clearly show the lanes of traffic. The changes are meant to reduce problems of speed, distraction and driver confusion (as to lane markings) on NE 75th Street. Since it is known that narrowing a roadway causes drivers to slow down, we anticipate that SDOT engineers will propose to create a center turn lane and only one lane of traffic in each direction on NE 75th Street. In some places, such as 28th Ave NE used by people going to Wedgwood Pool, a dedicated right-turn lane will be created. Also in progress are changes to loading zones and drop-off procedures at Eckstein Middle School, 3003 NE 75th Street, where there is a lot of traffic congestion before and after school.

Prof. John Pucher wrote an editorial in The Seattle Times on July 14, 2013, “Building a bicycling renaissance in Seattle.”