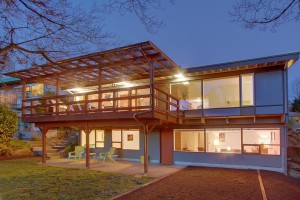 An organization with a strange name, Docomomo WEWA, is Documentation and Conservation of the Modern Movement, Western Washington.  On Saturday, August 10, Docomomo WEWA is offering tours of two houses in Wedgwood which were designed by modernist architect Paul Hayden Kirk.  The houses are on 28th Ave NE in Wedgwood #3 which developer Albert Balch built in the 1950’s.

The house tour is a self-guided event and you may come anytime between 2 to 5 PM on Saturday, the 10th, and check in at 2803 NE 82nd Street.  The tour fee is $10 per person, no reservations needed.  Please pay at the door (cash or check only, no credit cards.)  The second house on the tour is on the same block of 28th Ave NE and you will be given the location at check-in.  No photos of house interiors will be permitted.

Architect Paul Hayden Kirk is best known for his design of the University Unitarian Church on 35th Ave NE at NE 68th Street.  Along with Paul Thiry who designed the Northeast Branch Library at that same intersection, the two men were the principal representatives of the Pacific Northwest Modernism expression in architecture. 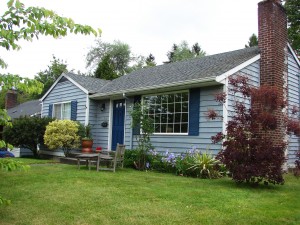 A 1940's Balch house in tradtional style with a pitched roof, front porch and decorative shutters on cottage-style windows.

Builder Albert Balch started the first Wedgwood group of houses in 1941 with very traditional designs.  In the 1940’s a Balch house had a cottage-like form with a pitched roof, front gable over a porch, an “open” appearance with an obvious front door and living room windows at the front of the house.  Over time Balch kept up with trends and built houses in modernist styles.  Modernist houses in the 1950’s looked as though they were constructed of boxes of varying shapes (volumetric forms) and had no “trim” or exterior decoration.  Very often the modernist house would appear to be “turned away from the street” as it had not many windows on the front side, and the areas of family living were at the back of the house.  The houses on the August 10 tour are examples of the 1950’s designs in the Pacific Northwest Modernist style by its premier architect, Paul Hayden Kirk.