Home »Businesses»Guest Post: "What We Learned From Our Survey" 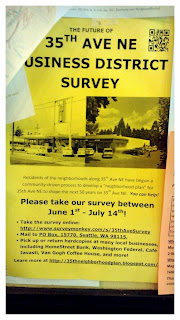 Thank you to the 1,038 people who took the 35th Ave NE Business District Survey between June 1st and July 14th! We heard from lots and lots of you which means lots and lots of data to look at, which is a great problem to have.

Given these 4 methods, we ended up with 914 respondents to the online survey and 124 hardcopies of the survey, which is loads of data to chew on. So, what have we learned from these 1,038 surveyors? Here are a few results that caught our eye. Here are all the results (HTML LINK) for your viewing pleasure, or you can download the full results in an .XLS Spreadsheet [92KB] if you’re a fan of statistics.

We’re doing a bit more analysis of the survey results to see whether or not there are differences between the online survey results and the hardcopy surveys or between different demographics. We also may compare these results with similar surveys in other business districts that we are aware of as well. We’ll post this further analysis at a later time.  For now, we hope you find the results as equally interesting as we do.