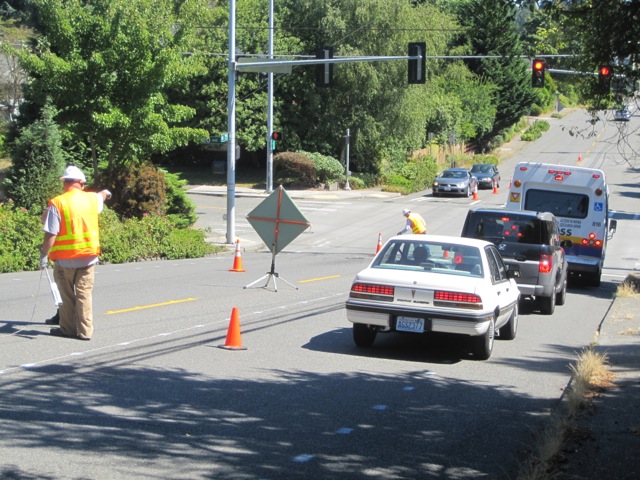 On Wednesday, August 21, alert neighbors began tweeting the news that road work had begun on NE 75th Street, as per the changes announced for the Road Safety Corridor Project. The Ravenna Blog ran out to capture photos of the work in progress.

The work on NE 75th Street is called “channelization,” meaning changes to the lane markings.  There will now be only ONE general purpose travel lane in each direction.  One of the purposes of having only one lane is to create greater safety by slowing down traffic.  Reducing speed is the number one measure which has been proven to lessen the number of accidents.  Other changes to NE 75th Street will be the creation of bike lanes and a two-way center lane restricted for use of left-turns.  A marked crosswalk will be installed at 28th Ave NE northbound, a heavily-used street which leads to the Wedgwood Swim Club.  Read a summary of the events and the public meetings which led to decisions on NE 75th Street changes here.

Work on NE 75th Street is scheduled to be completed by Wednesday, September 4, the day that public schools will start (pending settlement of teacher contracts!)  As you travel on NE 75th Street in coming days, watch out for road work in progress, allow yourself more travel time, and SLOW DOWN, Wedgwood!