In September the City of Seattle announced that they had identified a site for a new North Precinct Police Station, to replace the present one. 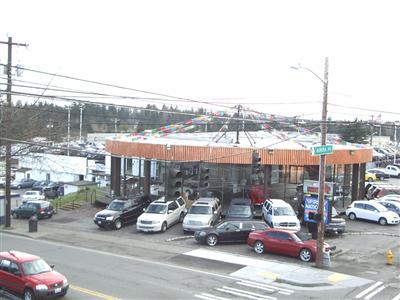 On the southeast corner of N 130th and Aurora is presently a car leasing business. The site will become the new North Precinct Police Station with a new building.

The new property is located at the southeast corner of Aurora Avenue North and North 130th Street.  City Council review and approval of legislation authorizing the property acquisition, including a public hearing, is expected in December 2013.

“The Seattle Police Department outgrew its current North Precinct police station long ago, and now, with the improving economy, we’re in a position to do something about it,” said Seattle Mayor Mike McGinn. “We’ve found a site for a new station that will meet all of SPD’s operational needs and even offer space for community use. I encourage everyone interested to attend the city’s fall open house to learn more about the project.”

On Saturday, October 26, the City will host a community open house to provide more information on the site selection process, how the site meets SPD’s operational needs, the development schedule, and future opportunities for public comment.  The open house will be from 10 AM to noon at the Bitter Lake Community Center gym, 13035 Linden Avenue North.

“Being on the corner of major arterials with good access to I-5, and offering enough space to build a station that will meet our needs for decades to come – this site offers the best location for the Seattle Police Department’s north-end operations,” said Interim Chief of Police Jim Pugel.

In response to City Council direction, the Department of Finance and Administrative Services (FAS) is accelerating the project to site, design and build a new police station for Seattle’s north end. With a goal of opening a new station in late 2018, FAS is looking for ways to compress the siting and development timeline.  Completion of the process of acquiring the site is anticipated by early 2014.

FAS is also assembling an architecture and engineering design team so building predesign can begin this year, instead of waiting for the purchase process completion. Negotiations with SRG Partnership, chosen through a competitive process to lead the architecture and engineering team, are under way. To further accelerate the schedule, the facility will be constructed under the GC/CM process : general contractor/construction manager selected early in design process vs. traditional design-bid-build. 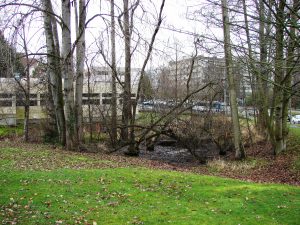 While actual facility design has yet to begin, the new station is expected to be approximately 60,000+ square feet with a useful life of 30 to 50 years and able to accommodate up to 370 officers and civilian staff, with on-site multistory parking for patrol cars, visitors and staff, and the building will also offer community meeting space. The Police Department’s specific needs for the new station, including the type and amount of space required for current and future needs will be verified during the pre-design process.

The existing North Precinct, located at 10049 College Way N. was built in 1984 to house 154 staff and is now home to 254. The size and shape of the property prohibits adequate expansion at its current location.  The current building is wet all the time because it is next to a spring, the headwaters of the South Fork of Thornton Creek.  During heavy rains the basement of the station fills with water.

The property of the future police station consists of two adjoining parcels, one of which is currently occupied by an automobile-leasing dealership on the southeast corner of N. 130th and Aurora Ave N.  The other parcel is to the east on N. 130th Street.  While it is mostly a vacant lot, the eastern parcel also has an older office building, warehouse and ancillary buildings on it.  FAS will provide relocation assistance for displaced tenants and owners.

Visit the New North Precinct Station project website for more information and to sign up for the project’s listserv.  Telephone contact for more info is Robert Cruickshank, 684-4000.