Due to minor surficial contamination on the former substation portion of the site, clean up had to occur before the Parks Department would purchase the property.  This clean up took place earlier this year.  The only remaining physical hurdle to the Parks Department acquiring the site was the former CC & Company building itself.  While Seattle City Light owned the property, they had a ground lease to allow the building to be located on the site.  Unfortunately, the owner of the building found it difficult to remove the building from the site after Seattle City Light terminated the ground lease.  The Parks Department would only accept a “clean site” though before it would acquire the site though so their Department budget or park development funds wouldn’t be siphoned off to pay for the removal of the building.

If you drive by the CC & Company lot today (the former Seattle City Light Morningside Substation), you’ll notice a small crew of contractors getting ready to cap the utilities today in advance of tomorrow’s main event: DEMOLITION!  According to the contractors, the building demolition will be completed by Thanksgiving…maybe even tomorrow!  After that, we understand that Parks Department intends to introduce legislation into Council to formally approve the purchase of the parcel from Seattle City Light.  Once this occurs, the parcel will be “land banked” for a new Wedgwood park.   There are no funds available to develop any additional parks unfortunately, so this parcel will remain vacant for some time.  But it’s expected that the Parks Department will take a ballot measure to the voters in 2014 to fund the Legacy Plan, a funding package that the Parks Department has been working on for some time. 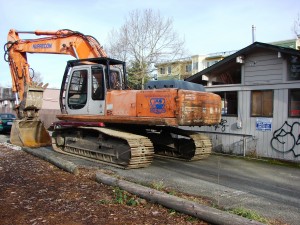 The Legacy Plan Committee is currently debating whether or not to include $10.53 million to develop and maintain 14 “land banked” park sites within this funding package. The Wedgwood Parks Committee wrote and submitted a letter to the Legacy Plan Committee urging them to fund the development of the Morningside Substation and a proposed Inverness Ravine Park Trail project. You can read that letter HERE on the Wedgwood Community Council Cloud.