Home »Crime»Get Your Bike Back

Are you missing your bike?  Then check out the Seattle Police Department’s newest Twitter feed, @Getyourbikeback. 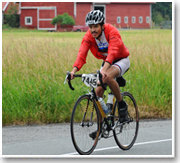 Right now, SPD has about 500 “found” bikes in storage at the Evidence Warehouse. Each one of those bikes was abandoned somewhere in the city, then later recovered by officers.  SPD may have your bike, and can reunite you with your wheels.

It’s a good bet that a number of the bikes in the warehouse were previously stolen, but owners don’t always call police to make a report. Why, you ask?

“People think that if they don’t have their bike’s serial number, they can’t make a stolen bicycle report,” says Found Property Detective Michael Whidbey. “You don’t absolutely need a serial number to get your bike back, but it does expedite the process.”

Don’t have your serial number?  Then how about a sales receipt for the bike?  Or a picture of your bicycle (better yet, of you riding the bike)?  Can you provide a vivid description of the bike, including details about special toe clips, stickers, scratches, dents or any other unique traits your bike might have?

The easiest way to get it back is to provide your case number (if it’s been tweeted on @GetYourBikeBack and you previously reported the bike stolen) and the bike’s serial number (if you have it), and send an email to FindMyBike@Seattle.Gov, along with your contact information.  Then send an email to FindMyBike@Seattle.Gov referencing the tweeted bike description, and provide as many details as you can.   Please don’t email to ask about bikes that AREN’T listed on @GetYourBikeBack.

If SPD’s Found Property detectives are not able to find a bike’s owner, the bikes still go to a good cause, and are often donated to several non-profits locally like the South Shore Middle School After-School Bike Repair Program, Earthcore, Lions Club and Alffia, which provides bikes to women and children in Africa.

If you aren’t currently missing a bike, PLEASE take this opportunity to take a close-up picture of your bike’s serial number, along with a few additional pics of your bike for good measure.  Not sure where to find your serial number? You can find out right here.

So, what do you do if you see a bike you think belongs to you on @GetYourBikeBack?