March 25 to 28 was Road Safety Awareness Week with a commemorative march in Wedgwood and several other events.  What can we as individuals, families and neighborhoods continue to do to help fight drunk driving?  One of the best ways is to access the resources of Mothers Against Drunk Driving and support their fundraising run-walk event on October 11, 2014. You can sign up as an individual, a team or office group.

Founded by a mother whose daughter was killed by a drunk driver, Mothers Against Drunk Driving® (MADD) is the nation’s largest nonprofit working to protect families from drunk driving and underage drinking. With the help of those who want a safer future, MADD’s Campaign to Eliminate Drunk Driving® will end this danger on America’s roads. 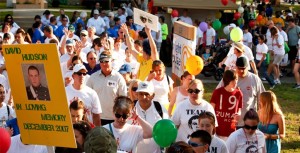 MADD Washington is part of a national network of chapters working to stop drunk driving, support the victims of this violent crime and prevent underage drinking.

MADD Washington mobilizes volunteers and partners to carry out the key components of their work which include:

Campaign to Eliminate Drunk Driving® Supporting high-visibility law enforcement and in-vehicle technology that prevents the operation of vehicles while the driver is drunk.

Underage Drinking Prevent and PowerTalk 21™ National day for parents to talk with their kids about alcohol, using the proven strategies of the Power of Parents, It’s Your Influence™ program to reduce the risk of underage drinking. Power of Parents program information is available year round and April 21st is PowerTalk 21. 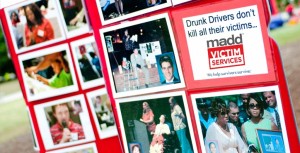 In its education programs MADD seeks to ensure the safety of Washington State roads through educating and informing community groups, schools, and government agencies about the importance of sober driving.

Victim Services: As one of the largest victim services organizations in the U.S., MADD also supports drunk and drugged driving victims and survivors at no charge, serving one person every 8 minutes at 1-877-MADD-HELP and through their network of local advocates.

In 2011, 156 people were killed in drunk driving crashes in Washington State. That represents a 7.7% decline in drunk driving fatalities from 2010-2011. MADD continues to work toward the goal of zero deaths or injuries due to this 100 percent preventable crime.