Home »Architecture»Life Along the Corridor 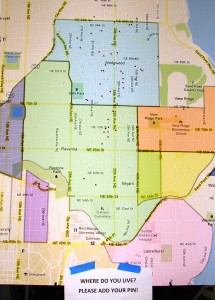 Life along the 35th Ave NE corridor: workshop attendees marked their home location on a map.

The arterial 35th Ave NE is the main business and commercial corridor of the Ravenna, Bryant, View Ridge and Wedgwood neighborhoods, including the areas from NE 65th to 95th Streets. There are zoned “commercial areas” at the intersections of NE 65th, 70th, 75th, 85th and 95th Streets. For a pedestrian walking along the 35th Ave NE corridor, there are some places to eat and shop, and places to access businesses and services such as churches and the library. There are other stretches of the corridor which don’t have much to offer. Some of the commercial “nodes” are underdeveloped or have aging buildings which may be targeted for redevelopment. When trudging along 35th Ave NE as a pedestrian, how well-designed is the streetscape? Is it safe, convenient and functional? Are there clusters of businesses and services which are accessible on foot?

The Future of 35th Ave NE

The Future of 35th Ave NE project kicked off on April 22, 2014, with an introduction to land use, building character, and streetscape design.  Then community work groups gathered around tables to identify key issues. This project is grant-funded and is led by consultants from MAKERS Architecture and Urban Design, and SvR Design which includes landscape architects.  These same consultants worked with Wedgwoodians on the Vision Plan completed in 2010.  The current 35th Ave NE project builds upon the principles established in the Vision Plan.

The evaluation questions of the current project include asking how the form and function of the pedestrian streetscape on 35th Ave NE will help create a safe and vibrant business district. What the 35th Ave NE project is not, is a “City” program which would address the roadway itself and traffic issues. What the project scope is intended to do, is create documentation for concerns for safe-crossing to businesses and services and the kinds of commercial options endorsed by neighborhood residents. With that documentation we can then interact with the City on issues of streetscape design, commercial zoning and the design of business buildings. 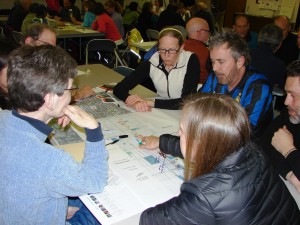 In survey results which are posted on the project page, 92% of respondents wanted increased commercial services along the 35th Ave NE corridor. This may require some redevelopment in present “empty spaces” and in older, low-rise buildings. Businesses need to be clustered together for viability, rather than strung out in isolated spots. Pedestrian safety and comfort have direct impacts on local business districts. In a recent project in the University District, businesses enjoyed a 6.18% increase in sales within the first four years after the street improvements. Vacancies of commercial storefronts decreased there, and one business owner said that better street lighting had increased sales by creating a safe nighttime shopping experience for his store.

Getting Ahead of Development

We know that some businesses along 35th Ave NE are in old buildings, and the property owners are beginning to turn over control to the “next generation” of their family. We are likely to see some of the present buildings replaced by new ones. To have a say in what will be built, we must get ahead of the projects by providing a framework of what is wanted by neighborhood residents, supported by zoning regulations and needed improvements to streetscape. 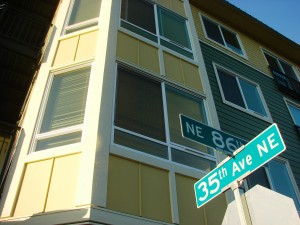 Construction of the Jasper: neighborhood unprepared for development which looms over 35th Ave NE.

One of the biggest “wake-up calls” in Wedgwood neighborhood history was the construction of what is now the Jasper Apartments at 8606 35th Ave NE, completed in 2012. By the time it was learned that a new four-story building was to go in, it was very difficult to have any input with the developers because they had already drawn up plans and applied for permits. It costs money for developers to do all the architectural plans and they resisted changes to the building requested by neighbors, because it would cost more money for re-drawing. One of the purposes of the present 35th Ave NE project is to document streetscape and building-type plans to be presented to and consistently requested from developers, so that future commercial buildings along 35th Ave NE would meet the needs of residents.

Join In, Let Your Voice be Heard

The Future of 35th Ave NE project has been endorsed by the Ravenna-Bryant Community Association and the Wedgwood Community Council. Anyone who lives in the area or uses the 35th Ave NE commercial corridor is invited to participate in the project. It’s not too late for you to join in on the process and let your voice be heard for improvements along the 35th Ave NE corridor. The next public workshop will be on Wednesday, June 11, from 7 to 9 PM at Messiah Lutheran Church Fellowship Hall, 7050 35th Ave NE. This workshop will address streetscape design and zoning: effective tools to balance competing interests along the linear and fragmented business district of 35th Ave NE. We need your voice!

The first workshop on April 22, 2014 for the Future of 35th Ave NE project was well-attended.