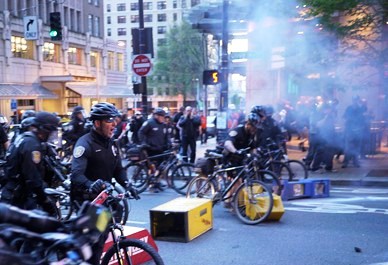 May Day (Thursday, May 1st) is traditionally known as a day to honor workers.  In the past two years May Day has featured protests against social injustice, with demonstrations and marches which deteriorated into vandalism and civil disorder in downtown Seattle.  On April 16, Interim Police Chief Harry Bailey and Assistant Chief Chris Fowler attended a hearing at Seattle City Council on preparations for May Day 2014.

At the hearing, City Council member Bruce Harrell questioned the two police commanders about plans for keeping the peace in downtown Seattle on May Day 2014.  “We do realize that people have a right to protest and march, but anarchists that are trying to harm people and property—we have to be aggressive and constitutional at the same time. So I’m very confident we’ve learned from lessons past.”

It is advised that you plan ahead for safety on May Day if you work or shop in downtown Seattle or pass through on bus connections.