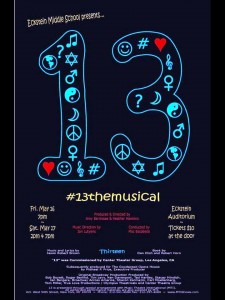 The story of a young man’s coming-of-age is told via music and drama in 13 the Musical, to be performed at Eckstein Middle School on Friday and Saturday, May 16 and 17.  Young Evan Goldman is about to turn 13 and he is preparing for his Bar Mitzvah in New York City while also trying to cope with his parents’ recent divorce.  Evan gets the news that he and his mother will move to a small town in Indiana, where Evan must learn some more coping skills: how to enter the social circles of a new school with its popularity pecking order.