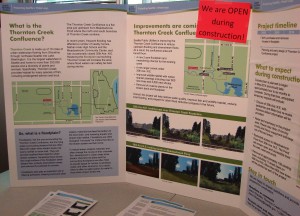 The summer of 2014 will be the third year of improvements in The Confluence, the flat area along 35th Ave NE between NE 107th and 115th Streets.  In the past two years Meadowbrook Pond was dredged and enlarged for more capacity to hold floodwater.  This year the creek which crosses under 35th Ave NE at NE 107th Street will be widened to handle more water and to improve the natural environment. 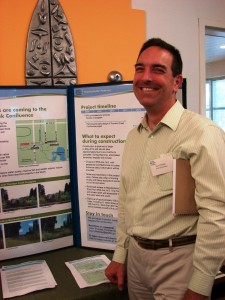 Jason Sharpley of Seattle Public Utilities is the Project Engineer for The Conflluence work in the summer of 2014.

On Tuesday evening, May 13, people at a well-attended info session at Meadowbrook Community Center asked questions of the city departments, including Seattle Public Utilities (SPU) and Seattle Dept. of Transportation (SDOT) about this summer’s Confluence Project.   The Confluence Project work will be overseen by Jason Sharpley, Project Engineer with SPU.  The project requires input from several agencies, including METRO Transit which will have to re-route the 64 and 65 buses over to Lake City Way NE via NE 95th and NE 110th Streets.

Why is Seattle Public Utilities doing this project?

For many years the Confluence area between NE 107th to 115th Streets has been subject to flooding during heavy rains.  Water has sometimes come up over 35th Ave NE, damaging the roadway, and homes have been flooded.  The Confluence is the site of convergence of the North and South Forks of Thornton Creek, the major drainage system of northeast Seattle.  For flood control, improvement of habitat for wildlife and native fish species, and cleaning of the water, the Meadowbrook Pond and the creekbed nearest to NE 107th Street need to be enlarged for greater capacity. 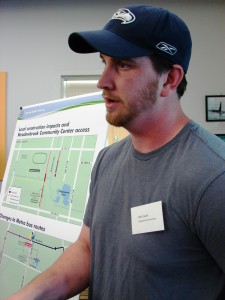 The private contractor, Westwater Construction, which has been hired to do the modifications to the creekbed, was represented at the May 13 info session by Project Engineer Mick Caplis.  Westwater will oversee clearing of trees which are choking the creek channel, such as the poplars on the west side of 35th Ave NE.  The creekbed will be enlarged and meanders created to slow the flow.  New, much larger culverts will be put under 35th Ave NE and this is one of the reasons for road closure of several months duration.

During construction, Meadowbrook Community Center and the swimming pool will be accessible by traveling northbound-only on 35th Ave NE just north of NE 105th Street.

Stay tuned for the impending road closure, estimated to be coming by or before May 20.  You can check the project page for updates and sign up for e-mail alerts.  Watch the 64 and 65 bus stops for “detour” notices. 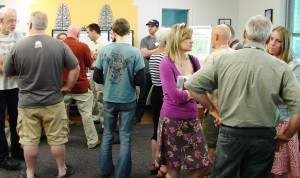 The Meadowbrook Community Center buzzed with questions and discussion at The Confluence Project info session on May 13.