Today a report called Dangerous by Design was released by the National Complete Streets Coalition, a program of Smart Growth America.  The report ranks the Seattle region as among the safest in the nation for pedestrians.

Over the decade from 2003 to 2012, 375 people were killed while walking in the Seattle area.  The report, Dangerous By Design – WA ranks America’s major metropolitan areas according to a Pedestrian Danger Index that assesses how safe pedestrians are while walking. The report found that these deaths could have been prevented through better street design.

The majority of pedestrian deaths occur on roadways that are dangerous by design: engineered and operated for speeding traffic with little to no provision for the safety of people walking, biking or using public transit. In the Seattle region, more than half of all pedestrian fatalities were on arterial roadways and almost half were on roads with speed limits of 40 mph or higher.

“We’re proud to be one of the best cities for walking, but we must do more to keep our residents and visitors safe, especially children and older adults,” said Lisa Quinn, Executive Director of Feet First. “Pedestrian deaths are preventable — even one is one too many.”

Older adults and children are the most at risk while walking, dying in disproportionate numbers. While comprising just under 13 percent of the total population, older adults over the age of 65 years old account for nearly 26 percent of pedestrian fatalities. 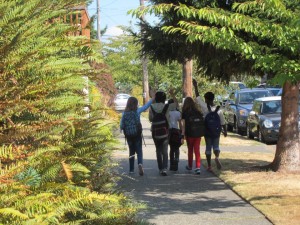 In the state of Washington, more than 40 children aged 15 and younger were killed; pedestrian injury is the third leading cause of death by unintentional injury for children 15 and younger. According to a study by the Washington State Department of Transportation, investing in Safe Routes to School programs across the state has resulted in more children walking and bicycling to school; new sidewalks and reduced speeds near schools; and no collisions in any location after project completion.

“We have new policies on the books that can help make our streets safer for everyone, without expensive engineering review. The Washington State and Seattle Departments of Transportation, in endorsing the Urban Street Design Guide from National Association of City Transportation Officials, have recognized that community street design is different than highway design,” said Andrew Austin of Transportation Choices Coalition. “We need to use these tools to create safe places for people to walk and meet our state and city’s Target Zero goals to reduce serious injuries and deaths to zero.”