The next public workshop for the Future of 35th Ave NE project will be on Thursday, July 31st, from 7 to 9 PM. This third and final workshop will be held in the same location as the previous two meetings: the downstairs Fellowship Hall of Messiah Lutheran Church at 7050 35th Ave NE. The church parking lot is accessed from 36th Ave NE.  From NE 70th Street, turn northward onto 36th Ave NE and continue to the end of the street. The church parking lot is on the left and the door into the church building leads straight into the Fellowship Hall meeting room. 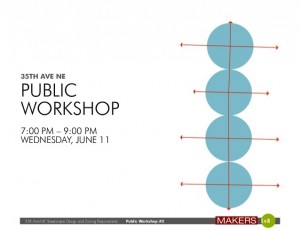 Results of the second workshop (on June 11) have been compiled and are available for your review. That meeting presented potential streetscape design features at the commercial intersections of 65th, 75th, 85th and 95th along 35th Ave NE.

Even though the word “streetscape” contains the word “street,” streetscape is not about the road itself which is traveled by cars. The definition of streetscape is urban design and conditions as they impact street users and nearby residents. Streetscaping recognizes that streets are places where people engage in various activities, not limited to car travel.

This series of three workshops, concluding on July 31st, is a grant-funded process to gather public input on planning for the future of 35th Ave NE, so that we can “get ahead of” development issues.

What will happen as commercial buildings age and are replaced? 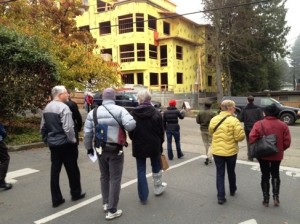 In December 2011 members of City Council, Traffic and Parks departments walked with Wedgwood Community Council members to look at development issues in the neighborhood.

The Future of 35th Ave NE is a proactive planning effort, recognizing that as commercial buildings age and are replaced, we must “get ahead” of redevelopment plans in order to have a say in what gets built by developers.

In 2007 the Wedgwood neighborhood got a wake-up call when it was learned that a new, four-story building was to replace an old, single-story former grocery store at 8606 35th Ave NE. At that time community members had not been aware that four-story buildings were even allowable in Wedgwood’s business district. Redevelopment stalled during the economic downturn which began in October 2008 but eventually the Jasper Apartments were completed, opening in July 2012. Awareness of what could potentially happen to many other old buildings in the commercial corridor along 35th Ave NE, led to efforts for a neighborhood planning process, beginning with the Vision Plan in 2010. 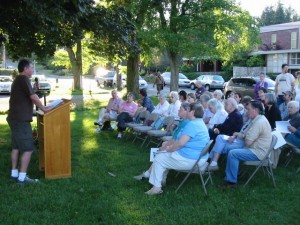 The Vision Plan of 2010 was a survey of Wedgwood and a statement of future planning, guided by the same consultants from two urban design firms, MAKERS Architecture and SvR Design, who are working with the present Future of 35th Ave NE project. In 2012 these consultants were among those who spoke at a series of seven Coffee Talks covering the basics of urban design and land use. Speakers included the American Planning Association, Washington Chapter’s Community Planning Action Team. All of the Coffee Talks are available on the Future of 35th Ave NE project page. 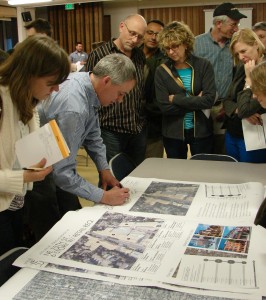 The Future of 35th Ave NE project has support from the Ravenna-Bryant Community Association and the Wedgwood Community Council, to include the commercial corridor along 35th Ave NE all the way from NE 65th to 95th Streets. Each “node” (intersections of 65th, 75th, 85th and 95th) varies slightly in configuration and zoning regulations and the buildings at each intersection are in various conditions of old/new development. The intention of the Future of 35th Ave NE workshops is to raise public awareness of the upcoming development issues and prepare documentation of community needs and desires in our streetscape.

Get the word out about the final workshop on July 31

It is important to get the word out and let community members know that this is their chance to be heard. Publicity efforts have included articles on this webpage, posters in store windows, and postcards mailed to addresses from 65th to 95th. But the best publicity is for all of us to tell our friends and neighbors to be sure to attend the July 31st workshop so that we can “have our say.” See you there! I (Valarie) will greet you at the sign-in table.