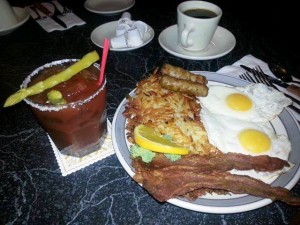 With football season underway, fans of the Huskys and Seahawks know where to grab great grub before the game, with breakfast at the Wedgwood Broiler.  After the game it’s time for dinner and drinks.  For those not attending the football games in person, the Broiler is open to watch the game and enjoy Broiler special menu items all day.

Located in the heart of Wedgwood at 8230 35th Ave NE, the Wedgwood Broiler traces its roots to the original founder of the Wedgwood-neighborhood identity, Albert Balch. Balch owned the corner property at NE 85th Street and used it for almost fifteen years only as a parking and staging area for his construction equipment and supplies.  In the busy years of the 1950’s as the new Wedgwood neighborhood began to fill up with families, Balch saw the need for a real sit-down, fine-dining restaurant, so he established the Broiler as a steakhouse.

Today, the Broiler menu still features iconic American food and drink.  Take a look at the Broiler page for the open hours, and watch Facebook for specials.  We thank Broiler owner Derek Cockbain and his staff for demonstrating the true spirit of Wedgwood in their hospitality and support of the neighborhood.