Note: A correction was made to this post to clarify that only one school is planned to operate on the site following construction.  The existing Decatur School building will remain on site, however, with the future of that building still uncertain.   See the results of the February 27 hearing, and the March 20, 2015 updated school construction info here.

It has been more than fifty years since a new school was built in the Wedgwood neighborhood and in that time Seattle’s land use regulations and building codes have become more complicated.  Since 2012 the Seattle Public School District has been working on plans to expand capacity by constructing a separate, new building, on the present site of Thornton Creek School at 7711 43rd Ave NE (original building name:  Decatur School.)

In 2013-2014 a series of public meetings were held on the new-school plan and a Departures Committee reviewed the plans and made requests.  The “departures” were items where the school building would “depart from” the restrictions of a single-family building zone.  At the end of 2014 a group of people who were not satisfied with the process, appealed to the City of Seattle Hearing Examiner.  The hearing was held on Friday, February 27, 2015 and was heard by Sue A. Tanner, Hearing Examiner. 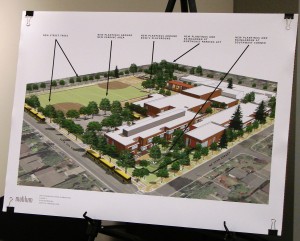 The new school site plan was discussed at the hearing on February 27, 2015.

The hearing on Friday, February 27, was conducted courtroom-style with the attorney for the school district, Richard Hill, calling witnesses and eliciting testimony on the planning process for the new school building.  Michael Skutack, Senior Project Manager for Capital Projects of the Seattle Public Schools, explained how the new-school project met the district’s standards for preparation and planning.

The site plan is for the new building to be located closest to the corner of 40th Ave NE at NE 77th Street. Parking and traffic patterns (school drop-off and bus zones) are arranged to access the building.  The north portion of the block is reserved for playground, athletic field and open space.  Plans are tentatively for both buildings to remain (existing Decatur School building plus new school building) although only the new Thornton Creek Elementary school program would operate.  Should the District open another program return to the Decatur School building in the future, which is still to be determined, plans have been developed for staggered start times and dismissal times with a 45-minute buffer for people to circulate around each building. 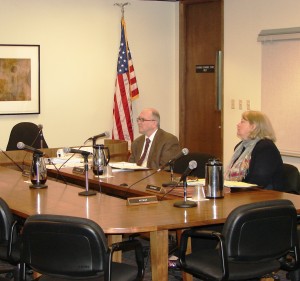 At the hearing on February 27, 2015, Mr. Hill was the attorney representing the school district and Ms. Godard testified for DPD.

Environmental soil testing was done for arsenic, asbestos, and lead in the soil of the fields around the present school building and the space where the new school is to be built.  No unusual levels were found.  A matter of dispute was whether testing for radioactivity is needed or not, and this was brought before the Hearing Examiner.  The school district’s hazardous materials testing did not include radioactivity.

Paula Johnson, Pacific Northwest Cultural Resources Director at Environmental Science Associates testified about the evaluation done at the request of the school district, to determine whether anything of historical or archaeological value could potentially be discovered at the site while new-school construction is going on.  The site was evaluated as at low risk of encountering archaeological data.  The site is not a known historical area and was unlikely to have been used by native Americans because the site is not near water.  The school site has already been dug up and reconfigured more than once since the 1940’s when the Shearwater Navy housing was built there.  From that time, through the 1960s when the present Decatur School building was constructed, the school block has been graded and reconfigured.  Ms. Johnson worked with the environmental-review process and also created an “inadvertent discovery plan” of how to proceed should anything of historical value be found on-site.

Holly Godard, Senior Land Use Planner with Seattle’s Department of Planning & Development (DPD) worked on the review of the school district’s plans for the new building.   DPD reviews plans to make sure they meet all construction and zoning requirements.  Issues which have to do with traffic, such as staggered start times, drop-off zones and school bus loading zones are not part of the building itself and therefore are not overseen by DPD.  It is Seattle’s Department of Transportation (SDOT) which must work with the new school project to address street improvements. 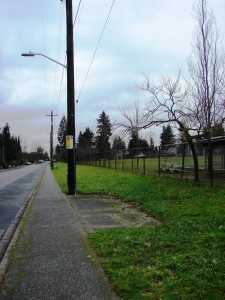 Curbs, sidewalks, and bus loading zones will need to be put in place on the surrounding streets to serve the new school.

Sean Dugan is a principal consulting arborist with Tree Solutions Incorporated which assessed the trees which are on the Thornton Creek School site now.  The baseline survey of significant trees at TC School is in the documents submitted with the environmental review (SEPA checklist.)  Mr. Dugan found 53 significant trees of 143 on the site.  He made recommendations for tree protection measures.   He reviewed the landscape plan which includes some tree removal during school building construction.  At the close of construction, 163 new trees are to be planted which will improve the tree canopy at the school site.

Tod McBryan, principal transportation engineer at Heffron Transportation, testified at the hearing about the transportation impact analysis which he prepared for the new school project.  To understand traffic impacts, data was collected around the site including observation of arrival/dismissal of students, and a count of available parking both on-site and on nearby streets.  Recommendations were for a transportation management plan including travel routes for drop-off of students.