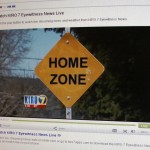 Did you know that 27% of the city of Seattle is without sidewalks?  In Wedgwood, even some streets around schools and bus stops do not have curbs and sidewalks for safe walking routes.  Because it is unlikely that Seattle will ever find money to add sidewalks to all of the needed areas, the Wedgwood Community Council will apply for funding for a new proposal called a Home Zone. The Home Zone or Shared Street proposal is for an eight-block area of Wedgwood from NE 90th to 94th Streets between 25th to 32nd Avenues NE. 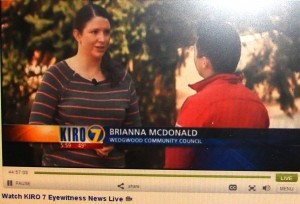 Wedgwood Community Council President Brianna McDonald was interviewed by KIRO 7 news about the problems of speeding and unsafe conditions on Wedgwood streets.

On Tuesday evening, March 3, Wedgwood Community Council President Brianna McDonald was interviewed by KIRO 7 news about the problem of speeding and dangerous traffic on neighborhood streets which have no sidewalks.  The Home Zone is proposed to have posted lower speeds as a traffic safety corridor.  On the main feeder streets from the Home Zone out to 35th Ave NE,  lines could be drawn to mark a pedestrian walkway.

The application for the Home Zone is being made to the 2015 Neighborhood Park and Street Fund of Seattle’s Department of Neighborhoods.  As a first step, the proposal will be presented to the Northeast District Council on Thursday evening, March 5.