The existing North Precinct Police Station is located at 10049 College Way North, near North Seattle Community College.  It was built in 1984 to house 154 staff and is now home to 254.  There is not enough space available to adequately expand it on its current site, and there are also environmental issues as the building is on swampy ground near the headwaters of the South Branch of Thornton Creek.

In 2013 the City of Seattle began planning conceptual design activities in advance of locating and building a new police station. During the following year, the City assembled an architecture and engineering team to perform building pre-design work without waiting for the purchase of an actual site.

Now the City has completed acquisition of three adjoining parcels at the southeast corner of Aurora Avenue North and North 130th Street, which will be the location of the new North Precinct Police Station. 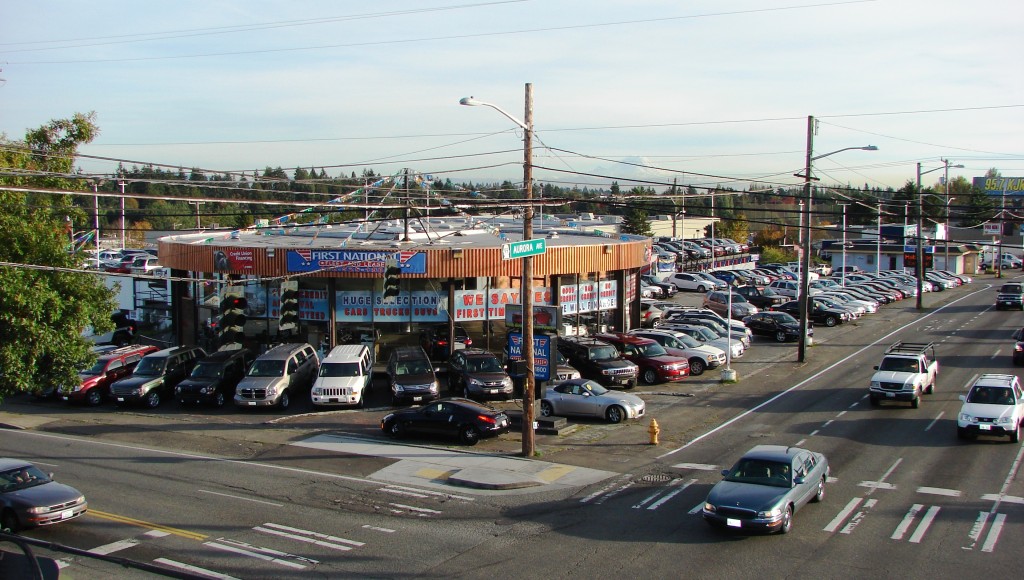 The southeast corner of Aurora Avenue (at right) and North 130th Street is the proposed site of a new North Precinct Police Station. There presently is a car leasing business on the corner. From this intersection there is good access to major arterial streets.

The owners of the three parcels, extending eastward from Aurora to Stone Avenue North, are amenable to selling their property to the City.   Part of the property is already vacant and there is an office building which still has some tenants. Per Seattle Municipal Code 20.84, the City will provide relocation assistance to tenants as they identify new locations and vacate the sites.

For facility design, the project team has program, conceptual plans and concepts for the overall shape and size of the new police station building.  You are invited to an Open House on Saturday, June 6, from 10 AM to noon to see the project designs and talk with team members.  The Open House will be held at Broadview-Thomson School, 13040 Greenwood Avenue North, in the Community Center Annex located adjacent to the parking lot.