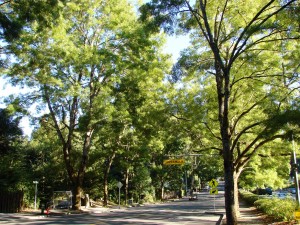 In the spring of the year Wedgwood’s Flame Ash street trees are fully leafed out with vibrant green, forming a verdant archway along 35th Ave NE.

Street trees are under the care of Urban Forestry, Seattle Department of Transportation (SDOT).  Urban Forestry’s mission is to administer, maintain, protect, and expand the City’s urban landscape in street right-of-ways for Seattle’s residents and businesses so that economic, environmental, safety and aesthetic benefits are maximized. 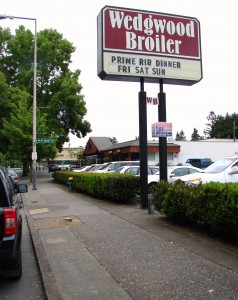 In response to an inquiry about a recently-cut-down street tree at NE 84th Street, Nolan Rundquist, City Arborist, replied:

Unfortunately the tree has been dead for two or three years since it was vandalized (girdled at the base.)  We recently received a complaint from someone that the tree might break off and fall on a car.  Although that was unlikely, we decided to remove the tree and we will fill the planting pit with concrete.