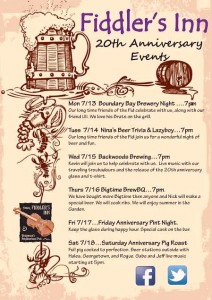 In 1994 the Fiddler’s Inn at 9219 35th Ave NE was a worn-out building with a rusted, non-working neon sign out front.  A new owner’s group acquired the Fiddler’s and began a renovation.  The building was dismantled and a few odd treasures came to light (a wooden leg stowed beneath the bar!)

The Fiddler’s Inn building was renovated from the ground up with everything from a new foundation to a new roof.  Interior wood paneling was preserved and reused, with the cabin-like roofline giving the feeling of the old building but with expanded space for a new kitchen.  The Fid became a non-smoking venue with great food and a line-up of music and performers.

Celebrate Fiddler’s twentieth anniversary this week with barbecue out on the patio and live music.

Read the story of Walt Haines, found of the Fiddler’s Inn, on Valarie’s Wedgwood in Seattle History blog.