Home »Businesses»Getting What We Want on 35th Ave NE 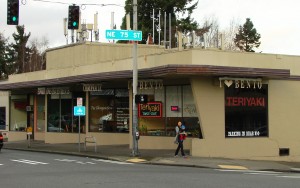 Some of the commercial buildings in Wedgwood are very old and the owner may decided to replace them with a new building. What will new buildings look like?

What is the future of 35th Ave NE?  As buildings age and are replaced, we want to have a say in how new buildings look and what the commercial offerings will be in the buildings.

For the past several years the neighborhoods of Ravenna-Bryant, Hawthorne Hills, View Ridge and Wedgwood have been working together in a process called The Future of 35th Ave NE.  This process addresses the disappointments of buildings which do not add commercial vibrancy along 35th Ave NE, such as the Jasper at 8606 35th Ave NE which does not have storefronts.  The Future of 35th Ave NE process incorporates our hopes for better-designed buildings with more of what we want, including pedestrian-accessible shops and restaurants. 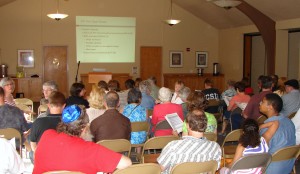 It was a packed house at the meeting on June 24, 2015, to hear about proposed zoning changes for the commercial districts along 35th Ave NE.

The Future of 35th Ave NE process reached a critical turning point in 2015 after the committee requested that the City of Seattle’s Department of Planning and Development (DPD) take a look at the issues.  In a well-attended meeting on June 24th, a DPD representative presented the zoning changes which would require that new buildings at the commercial “nodes” of 75th and 85th intersections meet the proposed requirements.  Potential zoning solutions could improve the pedestrian and retail experience along 35th Ave NE, giving us more of what we want.

The present process to address zoning and commercial development along 35th Ave NE has only to do with buildings at the commercial intersections of NE 75th and 85th Streets.  It does not address the condition of 35th Ave NE itself, because street work is overseen by Seattle’s Department of Transportation (SDOT).  It is not true, as has been rumored, that SDOT plans to put in bike lanes on 35th Ave NE; there simply is not enough room for bike lanes, and besides that, Wedgwood has a Greenway along 38th/39th Avenues NE which is intended to give bikes and pedestrians a quieter, less car-heavy route.  The only work now scheduled along 35th Ave NE is an arterial re-paving project in 2018.

The Future of 35th Project was presented to Seattle City Council’s Land Use Committee in February 2015.  At that time Councilmember Mike O’Brien was chairman of the committee. As of 2016, Councilmember Rob Johnson (District 4) is chairman with CM Mike O’Brien and two others serving as committee members.  When asked why there has been such a long delay in bringing the Future of 35th Project up to vote for the rezoning legislation, CM Johnson has replied that the project will come up in 2017.