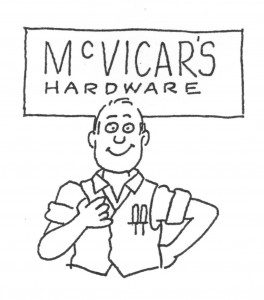 The Wedgwood neighborhood really began to grow after the end of World War Two in 1945.  At that time other areas of Seattle had no more space for new houses, but there were still large vacant tracts of land in Wedgwood.  Servicemen returning from the war came to Wedgwood to raise their families, and Wedgwood became a district of young married couples.

Along with residential housing, much of Wedgwood’s business district was built up in the 1940’s and 1950’s.  Stores like McVicar Hardware (present site of All That Dance) catered to the needs of young couples who were new homeowners and who needed everything from coffee pots to yard tools.

What we see in today’s business district in Wedgwood is very much a reminder of that 1940’s and 1950’s era.  As these commercial buildings age and are replaced, what will Wedgwood look like?

You are invited to take a walk in Wedgwood on Saturday, Sept. 19 or Saturday, September 26 with Valarie, neighborhood historian.  We will hear stories of Wedgwood’s past and talk about our present and future perspective along 35th Ave NE.  We will meet at the Safeway store sign on 35th Ave NE at the corner of NE 75th Street at 10 AM.  This walk-and-talk in Wedgwood is open to all ages.