Home »Community Events»Sunday in the Swamp 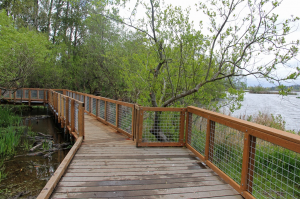 Everyone is invited to a guided tour of  the Yesler Swamp Trail on Sunday, November 22nd, at 2 PM.  The Yesler Swamp Trail is a very accessible urban amenity located next to the Center for Urban Horticulture, 3501 NE 41st Street in Laurelhurst.  Look for the Yesler Swamp sign at the corner of the East Parking Lot (farthest from the CUH building) where the Swamp Guide, UW Professor Kern Ewing, will meet you.  A donation of $15 is requested toward completion of the boardwalks through the Swamp.

The Yesler Swamp is so-named because Henry Yesler, who had a sawmill at today’s Pioneer Square in downtown Seattle, later set up another sawmill at the present site of the Center for Urban Horticulture.  The site was platted as the Town of Yesler in 1888, and eventually was renamed Laurelhurst by developers.   The Friends of Yesler Swamp are a group of hard-working volunteers who do restoration and native plantings in this wonderful pocket of nature in the City.