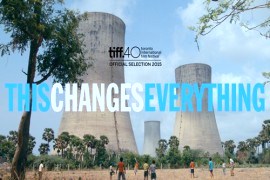 This Changes Everything was filmed in nine countries and five continents over four years, and is an epic attempt to re-imagine the vast challenge of climate change.

The film presents seven portraits of communities on the front lines, from Montana’s Powder River Basin to the Alberta Tar Sands, from the coast of South India to Beijing.  The filmmaker’s narration connects the carbon in the air with the economic system that put it there, to propose that we can do better.

This Changes Everything, will be presented by Wedgwood Meaningful Movies on Friday evening, December 11th at Our Lady of the Lake/Jubilee Hall, 8900 35th Ave NE.  Doors open at 6:30 and the film will begin at 7 PM.