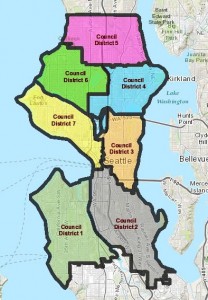 The year 2016 has begun with big changes in City of Seattle government, including new City Council members who represent districts, and a reorganization of the Department of Planning and Development (DPD).  In the year 2016 Wedgwood will have changes of ownership of some commercial buildings.  Wedgwood Community Council activists are now consulting with our new City Council representatives and working with the planning process to see how land use issues will be resolved.

Representing Wedgwood south of NE 85th Street is Rob Johnson, District 4, whose City Council committee assignment is Chairman of the Planning, Land Use and Zoning Committee.  On Friday, January 22nd the first committee meeting was held.  In attendance were Mike O’Brien, incumbent city councilman who now represents District 6 to include Ballard, Fremont and Greenwood.  Also in attendance were committee members Lisa Herbold (District 1, West and Southwest Seattle) and Lorena Gonzalez (Position 9, City-Wide Representative.)  The meeting was broadcast live and can be viewed again from the archive of the Seattle Channel. 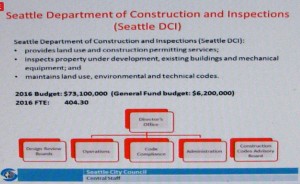 At the meeting of the City Council Committee, they heard reports from City staff members who explained the reorganization of DPD.  DPD’s functions have been separated into two divisions.  The Department of Construction and Inspections (DCI) will work with construction permit applications, design review, code compliance and inspections.

The other newly created entity is the Office of Planning and Community Development (OPCD).  OPCD will synchronize growth objectives with comprehensive planning.  Plans for Urban Villages such as Lake City and the University District are part of the Seattle 2035 goals for affordable housing in areas of available jobs with nearby transit links and commercial development. 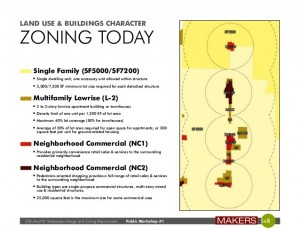 For several years Ravenna-Bryant and Wedgwood have been working on a land-use planning process culminating in the Future of 35th Avenue Plan.  In 2015 this project packet was presented to City Councilmembers in committee (not the full council) and to the (former) DPD.  The City was asked to do a legislative rezone of the commercial intersections in Wedgwood to require pedestrian zones.  This would require that new commercial buildings at the main intersections of NE 75th and 85th would have storefronts to create a lively, walkable retail district.   City Council must approve the city-wide Comprehensive Plan before Wedgwood’s specific rezoning requests will be considered. 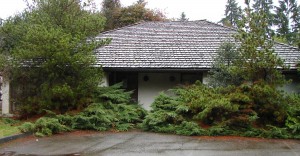 We are keeping close watch on redevelopment of the site of 8038 35th Ave NE.

In the meantime we already see changes coming in the neighborhood under present zoning.  The old real estate office at 8038 35th Ave NE has been vacant for many years.  The owner died in 2015 and his heirs then put the building up for sale.  The building is deteriorated and is considered a tear-down, so that the site has only been of interest to developers.  As Seattle City Council has yet to approve the recommendations of the Future of 35th Plan, a developer is not required to follow the aesthetic guidelines of the Plan.  The Wedgwood Community Council is engaged with this issue to follow up on land use concerns.  You can request info and get involved with the process by contacting info@wedgwoodcc.org 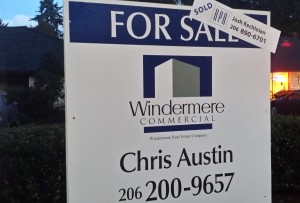 As of January 28, 2016, the commercial building at 8038 35th Ave NE has been sold. The Wedgwood Community Council has reached out to the buyer to ask what is planned for redevelopment.