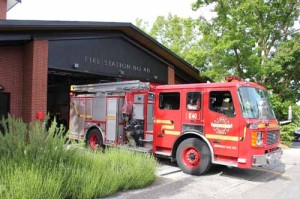 As part of the events for Neighbor Appreciation Day on Saturday, February 13th, the Wedgwood and Lake City Fire Stations will have Open House from 11 AM to 1 PM.  Come in to meet our local firefighters, see the station and learn about emergency preparedness.  The firemen have a map and procedure of how they will patrol Wedgwood looking for fires or collapsed buildings in the event of an emergency such as a major earthquake.

Wedgwood’s Fire Station 40 was built in 1965 and received seismic upgrades and interior remodeling in 2012-2013.  The station, located at 9401 35th Ave NE, was one of the last to be built in Seattle until city-wide improvements began in 2004 with the Fire Facilities and Emergency Response Levy.

During early years of the neighborhood when Wedgwood was outside of the Seattle City Limits, the old Community Club organized its own fire protection under a King County district.  During the 1940s years of World War Two, women of the neighborhood drilled as civil defense and fire response teams.