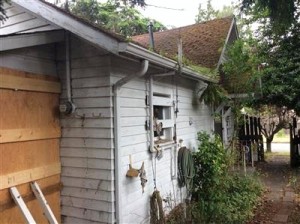 On Monday, February 29th, a passerby reported an early-morning fire at a boarded-up house at 2411 NE 70th Street.  When firemen arrived, three people fled the structure unharmed, and it was presumed that they were squatters.

The owner of the house died in 2012 and just recently the estate administrator transferred property ownership to a construction company.  The house has been scheduled for demolition but in the interim, squatters broke in.

All over north Seattle, vacant houses are vulnerable to occupation by squatters.  Due to a loophole in occupancy laws, if squatters stay three days then extensive legal action is required to get them out.  It is essential that vacant properties be inspected daily, and this includes rental properties.  Wedgwoodians should be alert to notice people moving into a house, but without a moving van or any furniture; or a rental sign still up in front of a house while someone appears to be moving in.  Contact the owner immediately or call 911 if you know that the move-in is not authorized.