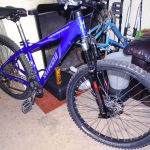 Many stolen items were recovered from the house.

Major Crimes Task Force detectives of the Seattle Police Department, SWAT and patrol officers arrested four people and recovered stolen bikes, cars and a motorcycle on Monday evening, April 18th, at a Wedgwood home. The house had been taken over by a group of people, including one suspected auto thief and burglar.

UPDATE:  In subsequent days, the family of the homeowner have reclaimed the property and are cleaning out the house.