Around northeast Seattle, Spring 2016 is construction season with some old buildings being torn down. 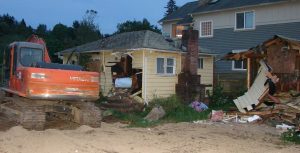 A house at 7555 25th Ave NE which had been derelict for some years, is being torn down as of the week of May 1st.  The structure had been vacant for a long time and had been repeatedly broken into by squatters.  The City of Seattle requires that rebuilding plans be approved before demolition of an existing structure, so for that reason we can anticipate that the owner has plans to rebuild soon. 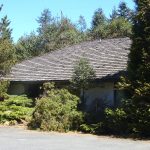 The long-vacant commercial structure at 8038 35th Ave NE has a demolition permit on file and the owner expects demolition to take place in the month of June.  The owner is a developer who has had the property subdivided, front and back into two lots, and has filed plans to build townhouse-type structures.  The Wedgwood Community Council is keeping in touch with the owner and updates will be posted on this webpage as we get them.

A house built in 1922, with a more-recently added wheelchair ramp, was sold to a developer in June 2015 and is scheduled to be torn down soon.  The house had belonged to the Schulte family who suffered death and injuries in an accident on NE 75th Street on March 25, 2013.  In 2015 the Schultes moved to Snohomish County.

The traumatic events of 2013 coalesced the neighborhoods of Wedgwood and Ravenna to petition the City of Seattle for safety improvements on NE 75th Street.  Subsequent studies have shown that the changes have helped to slow the traffic on NE 75th Street, down to close to the actual speed limit, which is 30 miles per hour.  In other words, some people are still driving too fast, as their average speed has been measured in excess of 30 miles per hour. 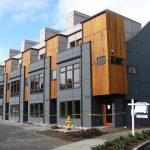 On 38th Ave NE south of NE 75th Street, more townhouse structures will be built in place of low-rise apartment buildings.  One of the row of four brick buildings has already been replaced.  Another row has been vacated recently and a demolition permit has been filed.