As of November 7, 2016, new speed limits are in effect on City of Seattle streets. 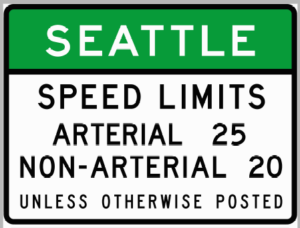 Watch for new speed limit signs to go up on City of Seattle streets and be aware that especially in the downtown core, speed limits have been lowered on arterials.

Each year in Seattle about twenty people are killed in traffic collisions and another 150 are seriously injured. Vision Zero is a campaign to end traffic deaths and serious injuries.  Speed plays a role in all serious injury and fatal collisions, so lowering the speed limits will reduce the severity of collisions and will increase likelihood of survival for car drivers, passengers and pedestrians.