Have you received a Democracy Voucher in the mail this week?  Here is how you can use it.

What’s the Democracy Voucher Program?
It’s a program that’s out to encourage more Seattleites from across the city to donate to political campaigns, and the first of its kind in the country. As a Seattle resident, you get $100 (four $25 vouchers) from the city that you can give to any eligible candidate in the November 2017 city elections.

So who can I give money to?
For this year’s elections, voters can only give money to city council and the city attorney candidates. In 2021, the next mayoral election after this year, voters will also be able to give money to mayoral candidates. (Mayoral races have a higher spending limit, so the program wants a little time to build funds so it doesn’t go broke in its first year).

You can “spend” your vouchers however you’d like – all four can go to one candidate or you can use each one to support different candidates. 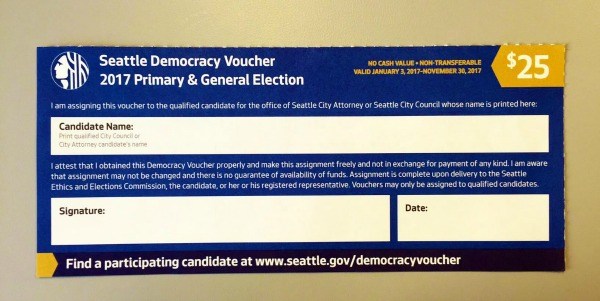