Between NE 85th to 95th Streets the western border of the Wedgwood neighborhood is along Lake City Way NE.  Because this is in a commercial zone, the adjacent housing is becoming more and more dense with multifamily housing projects.  The latest to break ground is at the corner NE 85th Street directly across 20th Ave NE from Growler Guys. 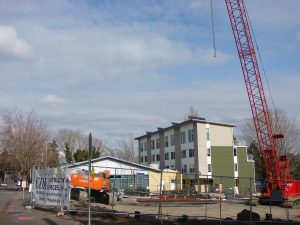 The Two Cranes Aikido building is at left and the Sedona at right looking north along 20th Ave NE. Growler Guys at 8500 Lake City Way NE is to the left of the photo.

Now another construction project is underway to take the remaining space at the corner of NE 85th Street and 20th Ave NE.  The project permits were first applied for in 2008 and we may speculate that the project stalled during the economic downturn of that year.

Now the project is going ahead for a tall apartment building and retail at the sidewalk level.  Below is the design drawing of what the project will look like when finished.