Home »Uncategorized»Wedgwood’s Park is Funded! At Least We’re Pretty Sure it is…

On Tuesday, September 27th, the Seattle Parks District Board (aka, the City Council) adopted the 2023 Finanical Plan for Cycle 2, a 6-year period between 2023-2028 which authorizes $788 million in funding over the 6 year period ($118 – $143 million/year).  Included in this funding are the resources to develop the 8 landbanked park sites who were supposed to be developed as part of Cycle 1 until emergency reappropriation of that funding to address the City’s respons to COVID-19.

According to Appendix 1: Context | Pre-Commitments of the Seattle Board of Parks and Recreations Commissioners, Companion to March 26, 2022 Letter and Recommendation:

Six land-banked site park development projects were unfunded in the final year of Cycle 1 to provide operational support of SPR due to the COVID pandemic impact on General Fund resources and SPR earned revenues (Park Fund). These include Smith Cove (Phase 1), West Lake Junction, 48th and Charlestown, Morgan Junction, Wedgwood, and A.B. Ernst Park. SPR estimates it will take approximately $15 million to complete these projects. Additional O&M will be required to maintain the developed parks. 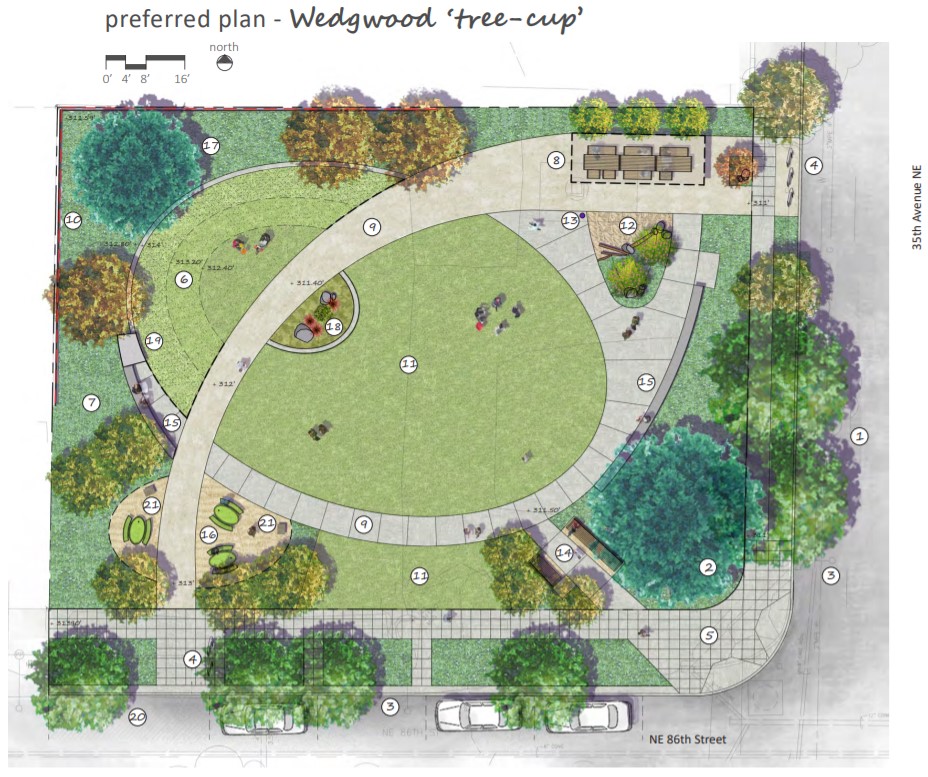 As this funding was only approved less than 1-week ago and is appropriated for Fiscal Year 2023, we do not expect that Parks will have detailed plans for when Wedgwood’s new park will be redeveloped.  However, from our update in February 2021, we anticipate that it will be early into the authorized Cylce 2 funding period.  Our understanding is that Parks will re-engage the designer they had contracted to take the approved conceptual plan through final design while the city identifies a contractor to build the park.  This will likely be a 6-12 month period from when the Parks re-engages with the park designer.

Over the next month, we hope to seek some further clarificatoin from Parks now that fuding appears to be more certain.

4 Replies to “Wedgwood’s Park is Funded! At Least We’re Pretty Sure it is…”